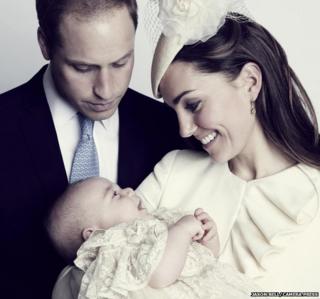 A new photograph from the christening of Prince George has been revealed.

The new snap shows the Duke and Duchess of Cambridge with the new Prince.

It is the fifth picture taken in the Morning Room at Clarence House after Prince George's christening on Wednesday.

They were taken by photographer Jason Bell who is well known for taking celebrity photographs.