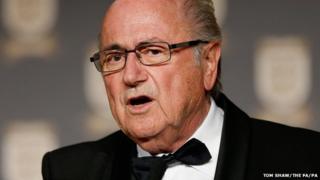 "We need to eliminate teams from a competition or deduct points," he said. "Only by such decisions is it possible to go against racism and discrimination."

At the moment football clubs can be told to pay a fine, or play without any supporters in the stadium, if their fans shout racist abuse.

Sepp said: "It is a nonsense for racism to be dealt with with fines. We can do something better to fight racism and discrimination."

"It is only with harsh sanctions that racism and discrimination can be washed out of football," he said.

Should teams be punished if fans shout racist abuse?

I think it is about time that something was done about the element of racism in football. Therefore I think that having points deducted if a fan shouts racist abuse is a good idea. The team can easily make a public statement appealing to their fans to stop.

I think points should be deducted from BOTH teams if there are racist taunts.

I don't think the football teams should be punished because they can't control the fans, they do what they want. The fans that are involved in racial abuse should be banned from the ground.

I think it is unfair. This is because it is the fans not the players that are shouting racial abuse!

I think that this is a very good idea because racist chants hurts people's feelings. So if the crowd don't want their favourite team being eliminated from the competition then don't do the chants. It's as easy as that.

I think they should lose points or be draw out of a tournament because being racist shou;dn't be taken lightly.

I think they should be definitely kicked out and they shouldn't be treated differently outside the world of football!

I think teams should have points deducted if their fans are racist. It is horrible to be racist to anyone particularly if they are someone you don't even know. It is up to the football team to tell their fans to stop, to keep their points.

I think teams should lose points because you can't shout racist abuse it's not fair for the players.

I think it is unfair on the club that they have to be kicked out of a game because the team can't do anything to stop the fans.

I think teams should definitely lose points if fans racially abuse players. In addition, the racist fans should be removed from the premises.

I agree with Sepp Blatter because to crack down on racism you need to take drastic action. If the fans really love their team they won't shout out any type of discrimination because they know that it will lead to their team losing points!

I think football teams should lose points for racist fans because the supporters want their team to do well and will stop being racist.

No I don't think the teams should be punished. I think the fans should get banned for three to four matches.

No because it's not the team's fault. If their fans shout racist abuse at players, then they should get the punishment, not the team.

I think if fans or players are racist they should be banned for up to two years because it's not good to be racist.

I don't think that football teams should be blamed for their fan's actions. It isn't fair. They should just punish the fan.

I think they should not lose points but the fans should not be allowed in any more games.

I don't think that's fair because it isn't the team shouting it. Although if it is a team member doing then yes they should lose points.

I think this idea is very good. It will stop people being racist because they don't want their teams to miss out. It will make football matches a nicer place to be.