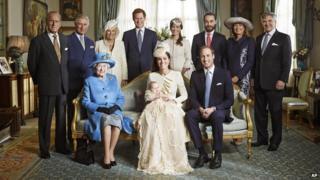 The first official photographs of Prince George have been released.

The four official portraits were taken in the Morning Room at Clarence House after his christening on Wednesday 23 October.

He was photographed with his mum and dad and other members of his family.

One of the images shows the Queen and the three people next in line for the throne, Prince Charles, Prince William and Prince George.