New galaxy is 'most distant' discovered yet 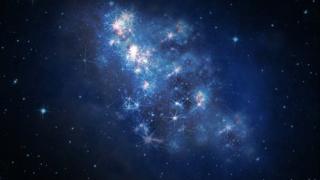 An artist's impression of the galaxy

An international team of astronomers has detected the most distant galaxy yet.

The galaxy is about 30 billion light-years away and is helping scientists shed light on the period that immediately followed the Big Bang.

It was found using the Hubble Space Telescope and its distance was then confirmed with the Keck Observatory in Hawaii back on Earth.

Because it takes light so long to travel from the outer edge of the Universe to us, the galaxy appears as it was 13.1 billion years ago.

Lead researcher Steven Finkelstein, from the University of Texas at Austin, US said: "One very interesting way to learn about the Universe is to study these outliers and that tells us something about what sort of physical processes are dominating galaxy formation and galaxy evolution."

He added that in the coming years, astronomers are likely to discover even more distant galaxies when Nasa's James Webb Space Telescope (JWST) is launched and other ground-based telescopes come online.