Cheese made in Stilton can't be called Stilton, says EU 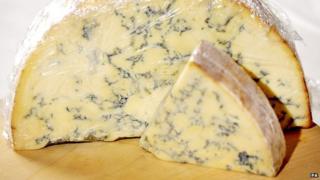 Traditional blue veined cheese known as Stilton can not be made in the village it was named after because of EU rules.

The Protected Designation of Origin, based on British government guidelines, says the name can only apply to cheese from the English counties of Leicestershire, Derbyshire and Nottinghamshire but Stilton is in Cambridgeshire.

A pub in the village of Stilton makes the cheese but has to call it Bells Blue because of the rules.

The Department for Environment, Food and Rural Affairs said it would consider a change to the rules if the pub made an application.

The law was introduced in 1993 to try and protect products made in particular areas.

Places with traditional recipes or goods have to apply to protect the name so that only their product can be labelled under that particular name.