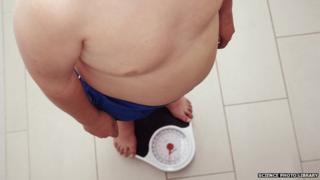 There have been calls for more to be done to tackle obesity in children.

The National Institute for Health and Care Excellence - NICE - say three in every 10 children aged between two and 15 are overweight, or obese.

They're encouraging kids to 'track what they snack' and say keeping food diaries and watching less TV could help.

NICE says parents need to support their children to have a healthier lifestyle.

Prof Mike Kelly, Director of the Centre for Public Health at NICE, said:

"Many of them are things we should all be doing anyway, including healthy eating, getting the whole family to be more active and reducing the amount of time spent watching TV and playing computer games."

"Being overweight or obese has a significant impact on a child's quality of life. It can affect their self-esteem and they are more likely to be bullied or stigmatised."

Would it work for you?

We asked you: would keeping a food diary help you to eat more healthily?

If you had to write down all the times you spent watching TV, would it mean you watched less - or wouldn't it make any difference?

You told us what you think.

I think it could help but a lot of people would lie in the books about what they ate, and I think it would be like a chore so some kids would avoid doing it.

Yes of course! I would love a food diary because sometimes I just forget to eat!

I think it would work because I am serious about my health.

I think a food diary would help get kids more active as they may not realise how much they have eaten or how much TV they have watched.

I don't think it would work for me because I'm skinny already and my Mum only lets me watch one hour of TV per day!

I would have a food diary because it would help you eat less things that are bad for you.

I think we should keep a food diary because my dad kept one and now he has lost 10 pounds!

I'm actually working on a healthy diet. I exercise and run every day and I think a food diary will help even more.

I think if I wrote down that I was watching lots of TV it would make me feel bad so it would work for me.

It probably would change my diet, but not the amount of time I spend watching TV because I don't watch it much anyway. I think I'll give the food diary a try some time.

I would keep a food diary because it would help me to eat healthier and lose weight.

I think that a food diary would encourage better eating habits because it would make you feel bad having to write down a snack that you know you shouldn't have had. If parents were to check the diary regularly they could see what their child is snacking on and take action to prevent this, for example, leaving it out of the weekly shop.

I think a food diary would not help me to eat more healthily because some foods are just too tempting and you wouldn't bother looking at your diary.