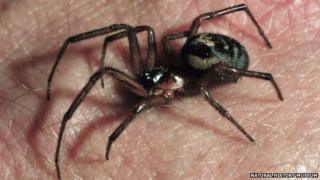 A school has been forced to close because of an outbreak of Britain's most venomous spider.

False widow spiders have been found in the ICT block at Dean Academy, in the Forest of Dean in Gloucestershire.

Vice principal Craig Burns has written to parents to tell them the school will be shut while it is fumigated - which is when specialists use fumes or chemicals to de-bug an area.

There's been a rise in the number of sightings of false widows recently.

Conservationists think it could be because of climate change.

Mr Burns said the school called in pest control experts as soon as they realised the spiders were there.

He said: "This will enable pest control to fumigate every area in the academy and ensure everyone's health and safety,"

"There have been no reports of anyone being bitten by the false widow spiders at the academy but if you have any concerns please seek medical advice."

The false widow (Steatoda nobilis) is about the size of a 50p coin and is the most dangerous of the 12 species of biting spider known in Britain.

There have been no reported deaths from its bite in the UK, but it's still pretty nasty if it gets you.

Symptoms can include severe swelling, chest pains and tingling in the fingers.