Worldwide ban on harmful PIB being dumped at sea 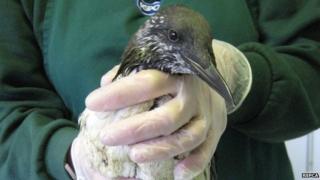 A chemical that killed thousands of seabirds off the coast of southern England earlier this year, can no longer be dumped at sea.

The substance called polyisobutene or PIB is an oil additive and until now ships were allowed to release it into the water as long as they were 12 nautical miles from land.

The International Maritime Organisation has now announced a worldwide ban on dumping PIB at sea. From now on ships will only be allowed to get rid of PIB when they are in port.

Wildlife charities and campaign groups have been fighting for a ban since January and April 2013 when thousands of birds, including guillemots, auks and razorbills, washed up covered in the glue-like substance.

One group of school children even made a protest rap about the incident.

Adam Grogan, RSPCA senior wildlife scientist, said: "Our staff worked around the clock washing and treating these poor birds in January and April and it was heartbreaking seeing the pitiful state they were in.

"Hopefully this will help stop incidents like these happening again, and save wildlife from suffering and dying like this in the future."