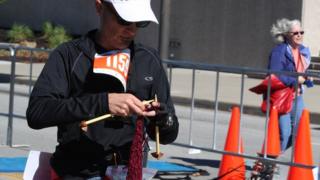 David Babcock combined his two loves - knitting and running - as he attempted to set a world record for the longest scarf knitted while running a marathon.

The university professor from America ran the Kansas City Marathon this weekend, knitting a huge scarf along the way.

He did it all in an impressive five hours and 48 minutes and managed to make a scarf almost 3.7 metres long! 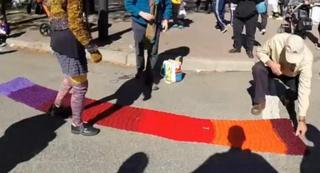 After the marathon the scarf had to be measured officially

David's scarf makes the current world record by Susie Hewer of the UK - a scarf of around two metres long - look quite small.