Comments: How much food do you waste? 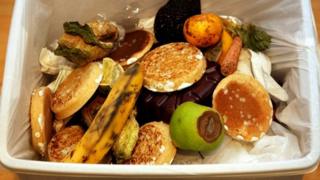 Tesco has revealed it threw away nearly 30,000 tonnes of food in the first six months of this year.

It's the first time the supermarket has published a report into food wastage at the store. Bosses say they want to reduce the amount that's thrown away.

The report says about a third (32%) of food gets wasted in the UK, most of it by producers and consumers, not shops.

Stefan Gates' tips on how not to waste food

The latest figures published by the Waste and Resources Action Programme (Wrap) in 2011 estimated that a total of 15 million tonnes of food was wasted each year in the UK. 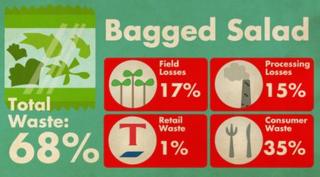 Bagged salad is the worst offender, with over two-thirds being thrown away 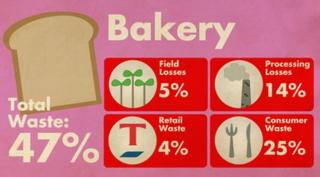 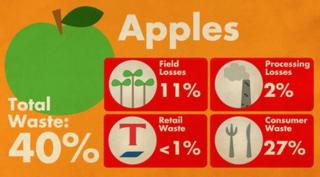 Then it's apples - two out of ever five go uneaten

Tesco said it will be removing "display until" dates from fresh fruit and vegetables, using smaller cases in stores and rearranging 600 in-store bakeries to reduce the amount of bread on display.

Other measures to tackle the problem would include providing simple tips to customers about storing fruit.

Matt Simister, from Tesco, said there was "no quick-fix single solution" to tackling food waste.

He said: "Ending multi-buy promotions on large packs of bagged salads is one way we can help, but this is just the start and we'll be reviewing what else we can do."

Richard Swannell, director of Wrap, said: "We welcome Tesco's approach to tackling food waste across their whole supply chain, and by identifying the hot spots they can tackle these areas effectively."

He also said that food waste is a "global issue" and that we must work together to reduce it to save money and the environment.

How much do YOU waste?

What changes do you think could be made to reduce food waste across the country?

Get in touch using the form below.

I think that my house throws out too much food, especially at dinner time.

We don't waste food because Mum makes us eat it all!

I think we should not waste our food because of the people in poor countries that have not got the food we have. If we don't want it yet, we put it back in the cupboard.

I waste quite a lot of food when I know I shouldn't.

People in poorer countries aren't getting any food yet the majority of food we have we throw away! If you make dinner then decide you're full, cover it up, put it in the fridge and eat it later! Don't waste food. You waste food, you're also wasting money. THINK!

I do waste quite a lot but now that I'm junior environmental officer, I'm trying to not waste as much as I do.

I think we shouldn't waste as much as we do. Our family waste quite a lot because we don't really eat our vegetables when our mum cooks them, and it wastes money. Some people in Africa don't even get food so we should be happy with what we have.

We only throw food away if it has gone out of date or if we can't re-heat it.

I don't think people realise how much food some people have and how little others have. For every bit of food we throw in the bin some people's lives would be saved by the amount we had just thrown out! In my family my mum takes out the amount she reckons we are going too eat and we eat it - if we find we are still hungry she will let us eat a sort of snack so nothing is wasted. It's simple!

To be honest, I waste a lot of food and I feel really bad about it. It makes me realise that poor people don't even have the food I throw away.

I don't think we have a problem. If we have leftovers my mum stores them for tomorrow and heats them in the microwave.

I don't waste too much food. I think it isn't fair that we have so much food and there are starving children everywhere who struggle to have one meal a week. There should be a limit on how much food shops can buy, a limit to what people can waste and consumers should be charged if they waste over their limit.

I try not to waste food but sometimes I waste quite a lot. If there is food that dogs can eat that I waste, I give it to my dog so, not all food in our house is wasted.

I don't waste much, because if there are any leftovers we eat it the next day, and if we can't eat it then I take it and give it to the birds. Then nothing is wasted!

My mum makes us eat all the food. We rarely throw any away. In my school we are not allowed to waste food anymore since some people don't have any. If we did not waste any food the poor could eat more. Think before you throw.

If I eat my meals at school I never leave anything. But sometimes at home my Dad makes LOADS so I try to eat as much as I can. If I go to an all you can eat buffet I'll eat tons of food.

I think that nobody really realises how much food they waste. Just think of the people who have no food compared to yourself.

I think I waste way too much food. It's sort of a bad habit. People in poor countries don't have as much as we do. We should appreciate what we have.

If there is any waste in my house my dog will eat it.

We don't waste any food. We put it in compost.

We waste a lot when the food mum cooks isn't nice. When we like it we hardly waste anything!

I think it's bad that big shops throw away too much food. Why not give it to developing countries? It's better than nothing.

I sometimes waste food. And each time that I don't eat all my dinner, I think of the starving children around the world who do not have any food and are desperate for it. To be honest, I think we should have rationed portions so that we do not go over the top with food and that we eat all of it.

I waste to much food and lots at dinner. I think if you don't eat it you should cover it up and eat it later or the next day.

We sometimes have to throw out a lot, because my sister doesn't like a lot of food!

My mum and dad will never let me waste food. Everything we don't eat my mum uses to cook with again.