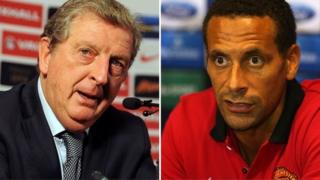 Ex-England captain Rio Ferdinand and manager Roy Hodgson have been named on the Football Association's commission to improve the national team.

The appointments come one day after Heather Rabbatts, the FA's only female board member, criticised the lack of diversity on the panel.

Ferdinand, 34, retired from international football earlier earlier this year, after winning the last of his 81 caps in June 2011.

The Manchester United player is the first non-white member of the 10-person panel.

FA chairman Greg Dyke said Ferdinand had always been intended to be included on the panel.

"We have been speaking to Rio and Manchester United for some time about him joining the group - before we named the other members of the commission," said Dyke.

"However, as he is a current Manchester United player we needed to be sure that Rio had the necessary time to fully participate on the commission and not impact on his day job. It has been agreed he does.

"As a current player with forthright views and opinions on the game, we can look forward to Rio providing significant insight and experience."

The ten members of the commission are:

The group was set up to consider how to increase the number of England-qualified players appearing for the country's top clubs.