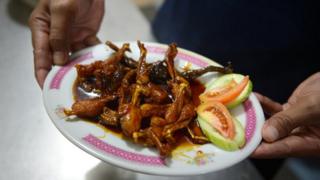 Archaeologists taking part in a major dig in Wiltshire in England, say they've found evidence that frogs legs were being eaten in Britain 8,000 years before they were first eaten in France.

The nation is famous for its cuisine and frogs legs is one of its most famous specialties.

The team say they found evidence of all sorts of food that was eaten in the Mesolithic ages (middle stone age), including salmon and nuts.

The experts think the food they found was eaten at some point between the years 7596BC and 6250BC.

Mr Jacques said: "This is significant for our understanding of the way people were living around 5,000 years before the building of Stonehenge and it begs the question - where are the frogs now?"