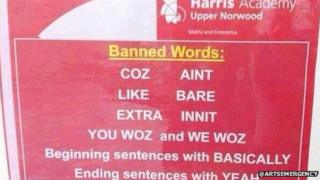 A school has hit the headlines today after its pupils were banned from using slang words in class.

Harris Academy Upper Norwood School in Croydon, London have banned words such as 'ain't', 'innit' and 'coz' in an attempt to improve the way the students speak.

Skills for jobs and university

In a statement, the school said: "In addition to giving students the teaching they need to thrive academically, we want them to develop the soft skills they will need to compete for jobs and university places.

"This particular initiative is just one of the many ways in which we are building the vocabulary of our students and giving them the skills they need to express themselves confidently and appropriately for a variety of audiences."

If children are caught using the banned language they won't b e punished but they will be corrected and asked to think about what they have said.

Terry Victor, editor of the New Partridge Dictionary of Slang and Unconventional English said: "It's wrong.

"[The word] 'ain't' was around in the 19th Century, people like Dickens used it... and how many politicians have you heard say "basically" to begin a sentence?

"Yes, it's irritating but it's part of deliberate language."

I don't use slang but I think that slang words should be banned from schools because when you have a test you might be writing slang without knowing.

I think that slang words should be banned at school because the young children at school can pick these things up and use them and teach these to other youths.

No! you cant tell people how to speak plus in the real world lots of people use it.

I use slang, and the teachers don't care. Why ban it? if kids speak like that then let them.

I think slang words should be banned because if you went for an interview and you used slang words it wouldn't look good. It's not all about your results but how you are as a person. Talking in slang will decreases the chance of you getting the job.

I think that it's seriously wrong because it's restricting what average teenagers can and can't do.

It ain't bad to use slang you know because that's how most of us speak so basically yeah.

Slang words shouldn't be banned, only ones that are offensive. Slang words are easier to use and they are part of an ever changing language.

I certainly hope it doesn't happen in my school because me and my friends use slang a lot!

I feel that slang words should be banned at school as they make a bad environment for students to learn in and younger kids will copy the people that use slang words.

I think that it is all right to use slang at play or lunch time but we should use proper English in class.

I think you should not ban slang words because they're cool.

I myself think slang is wrong because you are not speaking proper English. Also the way you speak also affects you literary skills (i.e. reading and writing). So I agree with the motion of slang being banned.

We should not have slang words because they could get you into trouble at school.

I think people should use slang, or in other words, it aint right for us peeps to talk norm :::)

Test your slang knowledge with our special slang quiz by clicking here.