Should rough games be banned from the playground? 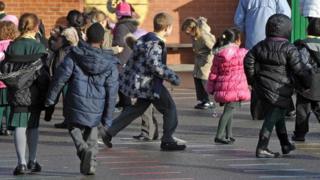 A primary school has hit the headlines after its pupils were banned from playing games like tig because they are too rough - we want to know what you think.

Parents of children at a primary school near Bolton, Greater Manchester, were told in a newsletter that children can no longer play games like tig -or tag - or British bulldog in the playground.

In a letter that was sent home to parents, the school says: 'children were being hurt because they were not moving about the playground safely and because they were playing games that, in a smaller space, were causing them to have accidents.'

The letter also said: 'It is not acceptable for us to accept that children will get hurt while playing and it is our job to ensure that the playground and playtimes are organised well to ensure safety.'

We want to know what you guys think. Have some games been banned in your school? Do you agree with the ban? Have you been hurt playing games in the playground? Get in touch using the form below.

At my old school they were already banned! But we had a massive area to play in so we could play tag and games like that but no games where you grab their wrist and put them behind their back, or pulling on their arms and things like that.

What a load of rubbish! Playing tig and British bulldog are not violent games, and getting hurt a bit is part of growing up in school. I think they shouldn't be banned!

I think that children should be aloud to play whatever they want as long as there is no violence involved.

I think that it should be stopped because it creates more accidents and injury, although football should be allowed as this is only rough if you make it.

I think you should be allowed to play tig. It is a bit extreme to ban tig just because a few people get hurt, lots of people get hurt in the playground anyway.

Banning them is ridiculous! Playground games allow children to have exercise which people say they aren't doing enough. It is also very fun!