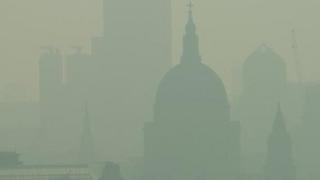 Air pollution across Europe is still high enough to damage human health and the environment, according to a report by the European Environment Agency.

The report says more than 90 per cent of people living in cities across Europe are exposed to levels of air pollution that are above global guidelines set by the World Health Organisation.

The EEA's executive director Hans Bruyninckx said overall the air has improved and the levels of many dangerous pollutants has dropped.

There's up to 50 percent less sulphur dioxide in the air which causes acid rain, and carbon monoxide emissions have dropped by a third.

However, Mr Bruyninckx said it's still not good enough as some types of pollution, like ozone and harmful particles, in the air have fallen only slightly.

He said: "Air pollution is causing damage to human health and ecosystems. Large parts of the population do not live in a healthy environment, according to current standards."

The European Commission is currently reviewing its air pollution standards.

The research also showed that although cities in Europe - along with the Americas - don't meet WHO standards the levels of certain types of pollution are relatively low when compared with those in southeast Asia, the Middle East and Africa.