Tian Tian the panda is not pregnant 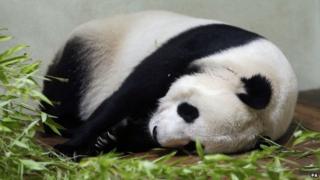 Panda fans all over the country have been waiting for news about Tian Tian's pregnancy for months now.

Experts said she had been showing some signs of pregnancy, but have now confirmed that she is not expecting a baby.

Tian Tian and the male panda Yang Guang are the first to live in the UK for 17 years.

Conservationists were hoping for a baby panda because the creatures are very rare.

It comes a day after wildlife expert Chris Packham told Newsround that big panda breeding projects might be a waste of money. Watch what Chris had to say here.