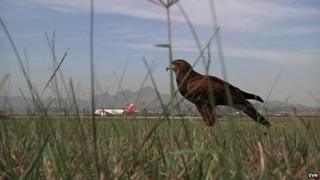 A team of Falcons are the latest recruits at an airport in Brazil after being brought in to keep runways free from flocks of birds.

Authorities there say bird strikes against planes are causing a real problem.

So they brought in trained falcons and hawks to stop flocks flying to close to airspace.

Falcon trainer Marcus Estevan said the birds are trained to look for clusters of birds flying too close.

He said: "The biggest problem we have is with heron, southern lapwing, vultures, and other raptors but there is a particular abundance of the carcara."

The falcons and hawks are trained to frighten away or capture their prey, but without killing them.