Rain made of diamonds on Jupiter and Saturn 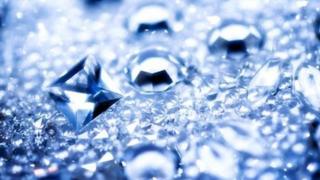 Giant diamonds, big enough to be worn by Hollywood stars, could be raining down on Saturn and Jupiter, US scientists have calculated.

Experts from the US say new information about the atmosphere on the two planets, suggests that chemical reactions in certain weather conditions could result in thousands of tonnes of diamonds being created every year.

They think lightning storms turn methane gas into soot which, as it falls, hardens into chunks of graphite and then become diamonds.

These diamond "hail stones" eventually melt into a liquid sea in the planets' hot cores.

Nasa scientist Dr Kevin Baines said the biggest diamonds would likely be about a centimetre in diameter - "big enough to put on a ring, although of course they would be uncut."

Dr Baines said: "People ask me - how can you really tell? Because there's no way you can go and observe it.

"It all boils down to the chemistry. And we think we're pretty certain."