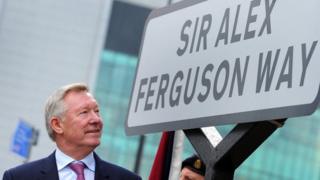 Sir Alex Ferguson has had a street near to Manchester United's Old Trafford ground named after him.

Waters Reach, a road that runs alongside United's stadium, has been renamed Sir Alex Ferguson Way.

Sir Alex retired at the end of last season after 26 years in charge that saw him become the most successful British manager of all-time.

He will also be given the freedom of the borough.

That's a traditional honour given to people to recognise their status within a town or city.