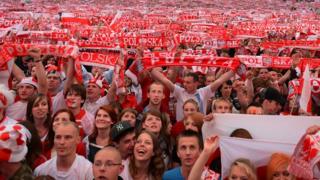 The Football Association has doubled the number of seats given to away fans for the World Cup qualifier match England v Poland.

They'll go head-to-head at Wembley on Tuesday 15 October to battle it out for a spot in the 2014 tournament, which will be held in Brazil.

The Football Association, who sell the tickets, have defended their decision to make a total of 18,000 seats available to Poland fans.

The organisation said there are lots more Polish people living in the UK now, which means that there's more demand for tickets.