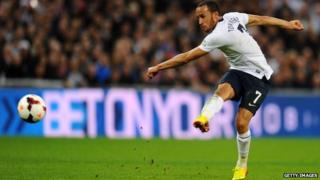 England are just one game away from reaching next summer's World Cup in Brazil after a convincing win against Montenegro.

Tottenham winger Andros Townsend was the man of the match with an outstanding display and a superb goal.

It was Townsend's international debut and some fans were surprised with Roy Hodgson's decision to include him.

Wayne Rooney put England in the lead before Montenegro's Branko Boskovic scored an own goal.

Daniel Sturridge's injury-time penalty made it 4-1 and put England in a great position ahead of Tuesday's game against Poland.

England top the group with 19 points, one ahead of Ukraine going into the final round of matches.