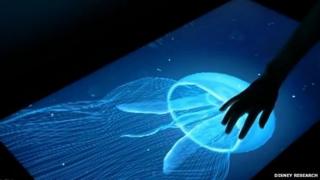 Disney researchers have developed a touchscreen display that lets you "feel" objects on the screen.

The team found that sending tiny vibrations through the display makes people think they are touching a textured surface.

The vibration-generating system could be added to phone touchscreens in the future.

"Our brain perceives the 3D bump on a surface mostly from information that it receives via skin stretching," said Ivan Poupyrev, head of Disney's interaction research group.

The more textured an object is, the greater the vibration is needed to mimic its feel.