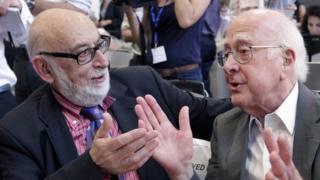 Two scientists have won the Nobel prize in physics for their work on the theory of the Higgs boson.

Peter Higgs from the UK and Francois Englert from Belgium shared the prize.

In the 1960s they helped come up with a theory to explain why the most basic building blocks in the universe have mass.

They predicted a particle - nicknamed the Higgs boson - which scientists say was finally discovered in 2012.

Peter Higgs said: "I am overwhelmed to receive this award... I would also like to congratulate all those who have contributed to the discovery of this new particle."