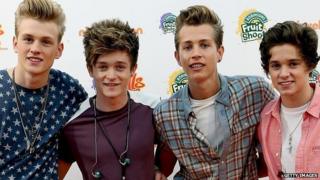 Up-and-coming British band The Vamps have reached number two in the chart with their debut single Can We Dance.

The band rose to fame after uploading songs to the internet and supporting pop veterans McFly on tour in 2013.

After hearing the news the band tweeted: "Guys, we are truly blown away by your love and support. We have THE BEST fans in the world hands down."

The boys promised their chart success is "just the start".

Why do leaves change colour in autumn?