Olympic flame arrives in Russia ahead of Sochi 2014 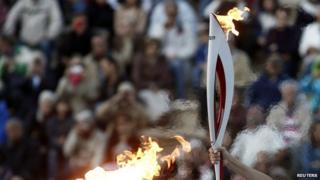 The countdown to next year's Winter Games in Sochi will began when the Olympic flame arrived in Russia.

The flame was handed over to the hosts of the 2014 Winter Games and will now travel across Russia before arriving in Sochi for the start of the Games in February.

It's the first time the Olympic flame has been in the country.

"Russia, for the first time in its history, received one of the most important, well-known symbols in the world - the Olympic flame.

We are proud that our Russian torch relay will be unique."