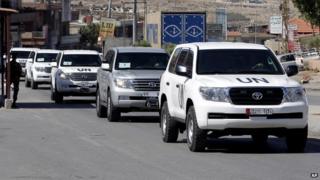 It's part of a deal to get rid of chemical weapons which was made by the Syrian government and leaders in Russia and America.

A specialist team from the Organization for the Prohibition of Chemical Weapons is in the country looking for and destroying the weapons they find.

The work follows international outrage at a chemical weapons attack near the Syrian capital Damascus in August.

There are an estimated 1,000 tonnes of weapons in the country.

Syria will have to destroy its weapons by the middle of 2014.

Click here to find out more about what's happening in Syria.