Comments: How important do you think it is to learn about faith? 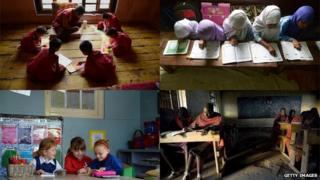 How much do you know about religion?

Well according to school inspectors Religious Education lessons at more than half of England's schools aren't good enough.

The report from Ofsted says poor teaching and confusion about the purpose of the subject leaves kids with little knowledge or understanding of different faiths.

We want to know what you think. How important is learning about different religions?

What have you learned about other faiths at school?

I think that RE lessons are important because it gives the chance for us kids to learn about other religions and what they do in different religions.

I think it is important to know about religion, however RE teachers shouldn't teach religion as fact, they should teach it as faith.

RE lessons are important because we need to know about religions so people understand each other and there is world peace.

I enjoy RE/RS lessons because I find them relaxing and it is interesting to learn about how religion can affect people's lives.

I don't like R E at school because I don't worship. Sometimes I say my prayers at night, but that's all. Worse, my school go to church to celebrate Easter and Christmas. I end up trying not to fall asleep!

I think R E lessons are really important because you learn a lot about other cultures beliefs and religion. At my school I think R E is taught very well and last year we visited a local Gurdwara which was very interesting. We also celebrate Diwali and Hanukkah, as well as the Christian festivals.

I think they are important because someone might get made fun of because of their religion but when you learn about their religion you will realise why making fun of someone is wrong.

I think my R E lessons are reasonable and I learn parts of different religions but I think they could be improved by looking a bit more deeper into the religion.

I don't like R E at all but I think it's good we learn about it.

I think the lessons are interesting but can be a bit boring. We also only learn about what Christians thinks and believe.

For me R E lessons are quite enjoyable and interesting, because we have a good teacher.

My family and I aren't religious, I think it's good to know about other religions but we only need the basics, teachers try and push it too much and they make it boring.

I think R E lessons are important so you don't offend people who follow a religion.

It is not important because R E will not get you a job but Maths and English will.

As I go to a Catholic school 10% of my lessons are based on R E and I believe they are really good because as well as teaching you about other faiths it teaches you how to live your life in the eyes of different religion .

I understand that not all of us have a belief, but R E doesn't just help you decide which religion if any you want to follow. It also helps you to understand others.

I don't think R E is important. We should only learn about our country and try and make it a better.

I think R E is extremely important. So many people in my secondary school didn't know anything about my religion, Islam, and were very curious and questioning. They loved knowing about it.