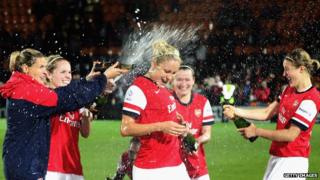 Big congratulations to Arsenal Ladies who have completed the cup double after beating Lincoln 2-0 in the Continental Cup.

It's the teams second trophy of the season after they won the FA Cup back in May and gives the fans something to cheer about after they lost their league title to Liverpool last month.