Italy is holding a day of national mourning after a boat carrying about 500 migrants from Africa sank near the island of Lampedusa.

It's now thought that 300 passengers may have died when the boat caught fire and sank.

A minute's silence was held in Italian schools in memory of the victims.

The accident is thought to be one of the worst accidents of this kind Italy has seen in recent years.

Read more: What is national mourning?

Each year thousands of men, women and children set off from north Africa across the Mediterranean Sea, in search of a better life in Italy and Europe.

The journey's very dangerous: the boats are overcrowded and often not safe to be on the sea; and many people are killed each year in accidents.

Some of the people who make it to Italy are allowed to stay as refugees if they are fleeing from war.

Many others are sent back to their own country.

Read more: What to do if you're upset by the news

The UN Refugee Agency is worried that Italy is not spending enough time working out whether people can claim asylum, and may be sending back refugees with a genuine legal right to stay. 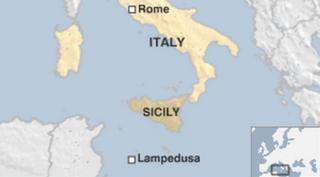 Lampedusa lies between the south coast of Italy and north Africa

One of the biggest problems is caused by traffickers - criminals who run the boats.

They charge large amounts of money for migrants to come on board and they overload the boats with too many people to be safe.

BBC reporter Alan Johnston, in Italy, says: "Over the years there have been numerous disasters involving migrants off Lampedusa, but seldom on anything like this scale."

He says people there are furious and crying out "for an end to the dangerous trafficking of people across the Mediterranean.

"But it is hard to see how the flow could be curbed, with so many people so desperate for a chance to make a new life in Europe, and traffickers in so many ports ready to take their money."

The United Nations says that more than 1,500 people drowned or went missing while attempting to cross the Mediterranean to reach Europe in 2011, making it the "most deadly stretch of water for refugees and migrants".

Italy has also been criticised for being poorly prepared for the numbers of migrants landing on its coastline.