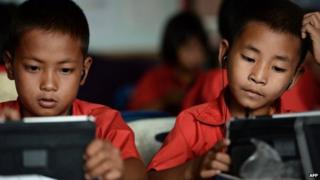 The number of kids owning basic mobile phones (not smartphones) has fallen for the first time, according to stats from telecoms regulator, Ofcom.

Instead of using mobiles, kids are now turning to tablet computers.

Ofcom said tablets have become "a must have device" for kids of all ages. The number of kids using tablets at home has tripled since last year.

And tablets are being used more and more by your younger brothers and sisters. Over a quarter of three- to four-year-olds now use a tablet computer at home.