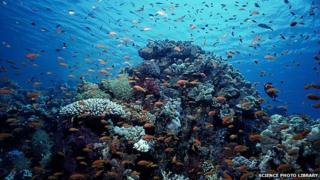 The health of the world's oceans is declining even faster than previously thought, a new report says.

They're being heated up by climate change and turning less alkaline after absorbing carbon dioxide gas.

Other issues like overfishing, and chemical pollution combine together to make the overall threat more powerful.

The International Programme on the State of the Ocean (IPSO) warns there could be mass extinction of sea animals if the sea gets too acidic or too hot.

IPSO says: "We have been taking the ocean for granted. It has been shielding us from the worst effects of accelerating climate change by absorbing excess carbon dioxide."

The IPSO report calls on world governments to stop the increase in carbon dioxide emissions, and to change the way we catch fish to make fishing more sustainable.

It also suggests that the world's seas should be policed by an international enforcement agency.