Radio 1 Teen Awards to include Tinie Tempah and Jessie J 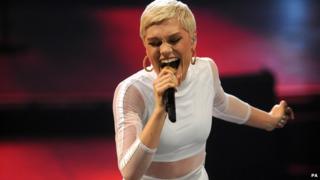 Fall Out Boy, James Arthur and Icona Pop will also play at the concert at Wembley Arena on 3 November.

Now in their fourth year, the Teen Awards are nominated by Radio 1 listeners and include prizes for Best British Single and Best Pop Act.

But the main focus of the event will see three Teen Heroes celebrated for their outstanding achievements.

The Teen Heroes have been nominated by Radio 1 listeners for acting selflessly, inspiring others or showing courage and bravery.

The winners will be chosen by a panel of judges, which this year includes Blue Peter's Lindsey Russell, and Radio 1 DJs Nick Grimshaw, Dan and Phil, and Greg James.

Tickets for the BBC Radio 1 Teen Awards will be released on Saturday 12 October at 9am. They cost £10 plus booking fee and will be available to 14-17-year-olds only, but you'll be able to watch it on BBC Three.