Blue Peter star Helen Skelton has hung up her badge after five and a half years presenting the show.

Helen shed a tear in the final moments of the show and thanked the audience for all their support over the years.

Helen joined Blue Peter in summer 2008 and since then she's become famous for her feats of daring and adventure.

During her time on the show Helen became the first person to walk a tightrope between two of Battersea Power Station's towers.

In 2010 she became the first woman to kayak 2,010 miles down the Amazon river on her own, for Sport Relief. 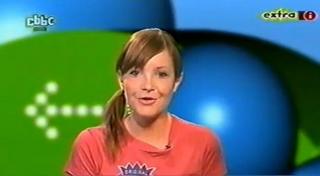 Helen first appeared on CBBC as a Newsround presenter

Helen said: "I will always count my time on Blue Peter as one of the most special times of my life."

You can watch Helen's final Blue Peter tonight at 5.30pm on the CBBC channel.