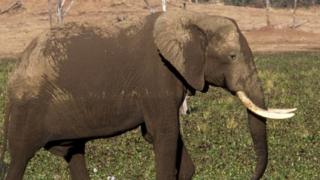 Poachers have killed 41 elephants in Zimbabwe's Hwange National Park by poisoning them.

It's thought cyanide poison was spread in the elephants' habitat to kill them, so poachers could take their tusks.

There has been a rise in the killing of elephants and rhinos in parts of Africa as demand for horns in Asia grows.

Animal horns and tusks are used as medicine in parts of Asia even though scientists say they have no medicinal effects.

Tests are still being carried out on the elephants but touching the poisoned animals is dangerous to any animal or human.

More to see: The illegal trade in elephant ivory