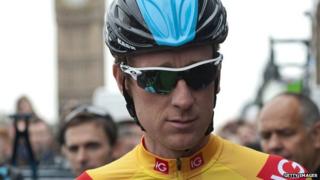 Before the race Wiggins said he was better prepared for this than he was for last year's Olympics where he won gold in the same event.

He had hoped for gold today which would've given him his first world title on the road.

But Germany's Tony Martin was 46 seconds faster and won the competition.

It's been a mixed year for Wiggins - he's just won the Tour of Britain, but earlier in the year couldn't compete in the Tour de France and Giro d'Italia races because of bad health.