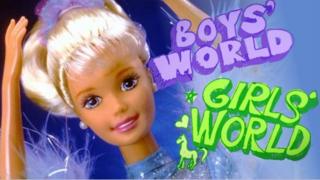 All this week Newsround is looking at how gender stereotypes affect boys and girls in the UK.

Today we're exploring whether toys should be specifically aimed at boys and girls.

Shops have been accused of limiting children by describing toys as "for boys" and "for girls".

I think you shouldn't feel ashamed just be true to who you are.

I play with Scalextric, Lego, craft stuff and I like animal toys. I don't think toys should be for girls or boys - anyone should be able to play with any toys. I play with my sister lots of the time and we have a great time together.

I think you can play with boys' toys and girls' toys but in the supermarket they have a boy and a girl section. Lego is in the boys' section and Moshi Monsters are in the girls'!

I love playing with Lego so sometimes I play with my brother's, but I would really like my own.

I don't think they should be labelled "boys" or "girls", and I think girls might even enjoy playing with Pokemon cards like me.

When people buy me gifts for Christmas which are pink and fluffy and covered in princesses it really offends me. I like to play with all sorts of toys and I want to be a GP when I grow up but all of the dressing up outfits have girls dressed as nurses and boys as doctors even though there are lots of female doctors. Girls can do anything that boys can!

My cousin who's a boy is a One Direction fan and when we went to the toy shop once he wanted the One Direction dolls but they were in the girls' section so he was embarrassed to buy them.

Labelling toys "boys" and "girls" isn't right. I like football, guns and zombies and I hate princesses, dolls and animal toys. Looking at things you're interested in shouldn't make you feel bad just because of the labelling.

I am a bit tired of what they think us boys should play with. If you ever go into a shop about half of the toys they're selling are football related, sporty or something like that. For at least 6 years I have been playing with Lego even if that means using a computer for it.

I really like football but on all the packaging of most of the stuff it has pictures of boys playing football.

I think that there shouldn't be girls' and boys' toys. My sister plays with cars, my brother plays with teddies, and they should not stereotype. It is silly, in my opinion.

I think that toys should be labelled as boys' and girls' because it's easier to find what you're looking for in toy shops. For example if I wanted a Nerf gun I would know it would be in the boys' section because they always are.

I love playing with Lego and my brother likes colouring in my "girls' doodles" book with me and we both love it. Though he gets embarrassed when his friends see him colouring in "girls' stuff" so I don't think they should be labelled. It's pointless.

I hate it when shops do that. I have a chemistry set that's for boys and love it. Also, when you go into the girls' aisle of a toy shop everything's pink - I hate it.

I think that games and toys should not be specifically labelled 'for boys' and 'for girls'. I think it is just very stereotypical because I'm a girl and I like to play football and I know boys who like to play skipping and we don't get judged, why cant it be the same with games?

I've never really played with action figures and all that stuff only when I was like 3 years old. Now I just play video games.

I think that boys and girls should share the same toys, even if they're Bratz dolls.

I believe that anyone has the right to play with what they want and no one should be pressured into buying one toy just because of their gender.

In my opinion they should only put toys into sections like "Cars this way" or "Teddies/dolls this way". It doesn't matter what boys or girls play with because there are things like science games or puzzles that both genders like.

I think that all us girls feel silly walking up to a counter with something that says "boys". I hate dolls, I do not believe in fairies, I love Ben 10, Spiderman and Power Rangers.

I think it is so annoying when most of the girls' stuff is bright pink because they just think girls like the colour pink. The kind of toys I play with are my DS and iTouch.

The supermarket in Cwmbran has a sign that says "boys' toys" and "girls' toys". The Lego is in the boys' area! I don't like that they do that. I love Lego and building things.

I think there shouldn't be separate aisles of toys for girls and boys because I'm a girl and I've never bought a doll in my life.

There should not be a section for boys and girls because children should be able to play with anything.

I am 10 and I love my teddy bears. It does not matter how old you are you you can like what you what.

I think toys that are clearly for girls (unicorns and princesses) should be labelled because it is clear. And things clearly for boys like maybe Star Wars should also be labelled. But most other things I don't think they should.

I think that it doesn't matter because as long as you are using your imagination you can play with anything.

I play with boys' toys and girls' toys because things like science kits and gross jokes appeal to me and toys shouldn't be put into sections.

I think toys should be for any child. My brother plays with my doll's house and I play with his cars.

I think it does not matter because children play with all kind of toys and people shouldn't judge.

We should keep all toys for boys and girls. I'm a girl and I like all Lego.

I think it's not fair to label toys "for girls" or "for boys". As a girl I like playing with Lego, cars and other things that boys might like to play with too, but I like a lot of 'girls' things as well.

I think kids should be able to play with any toy because say some girls like football, and with gender categories, they wouldn't be able to.

I play with Nerf guns even though they are in the boy section so the precise sections don't put me off.

I used to play with really girly toys when I was 4 but as I got older I looked at more boyish toys.

When I was little I played with dolls and bears but now I find myself playing my 3DS more. I sometimes get teased for this. I think everyone should be free to play with whatever they want and all toys should be separated by themes.

I think that they shouldn't name toys as there are some things on the shelves that I really want, but I'm far too embarrassed to take to the till to buy, as it says on it 'boys'. The worst are the girls' story books as I'm a bit of a tomboy and I don't want to hear stories about tea parties and dolls.

I don't care about the labelling, I play with all sorts of toys whether they're 'for' boys or girls. I don't mind what toys I play with, I can play with a power ranger, a Barbie doll, a jigsaw puzzle, play-doh... whatever toy I'm given, I play with it.

Toys should be for everyone and boys and girls can play with what they want - though some toys can be focused on the individual genders.

There is a show named My Little Pony, it was made for little girls, but it's alright for boys to like it as well! I think the show is great and that's coming from a boy.

Girls and boys should be able to play with all toys. I mostly like action figures and weapons, but I also want some toys from The Littlest Petshop.

I play with a lot of toys that seem to be labelled as a 'boy' toy but I also play with girls' toys. Everybody has different opinions and therefore shouldn't be judged on what they like.

I like to play with both boys' and girls' toys and sometimes I even take my brother's Lego and have a play.

I think they should make more toys that boys and girls play with.

I think that it should be "girls and boys" toys because my friend likes my toys and he's a boy.

Labelling toys for girls and boys are wrong. I know lots of young people who play with girls toys.

We think we should be able to play with anything we like.

In Argos they separate the boys and girl toys, I think they should mix them together.

I think boys and girls can choose if they want to play with boys' toys or girl's toys because a lot of girls like chemistry and a lot of boys like cooking.

I think that toys should not be put in girls sections and boy sections. I am a bit of a girly girl but I still have a skateboard and a football.

I play with Lego which most boys play with. I find that on the front cover it has a boy playing with it, so it puts me off from buying it.

I'm 11 and I still play with my Barbies, doll house and teddies. My brother is 10 and joins in too and we both love it. I sometimes play with his Lego and his pirate ships. It shouldn't be labelled because some children might have different preferences to others.

I doesn't really put me off playing with them. Some girls might like playing with the boys' action figures so if girls are going to the boy bit then there's no point in labelling them.

Thanks for all your comments. This chat page is now closed.