Should the wheelchair symbol be modernised? 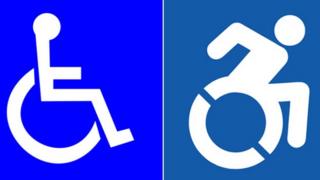 The current access symbol and the new 'more active' design

A group of designers think the access symbol - a stick figure in a wheelchair - needs a refresh. Do you agree?

The American designers say the current symbol makes the chair itself look more important than the person in it.

They want a new icon with the user seen actively moving the wheelchair - similar to other symbols where the stick figure is seen actually doing something.

Should the symbol change?

Does it make a difference what the symbol is like?

Or do you think the symbol we already have is easy to understand and should be left as it is?

My friend Ellie has a frame to support her when she walks and she has a sticker in her car to say she is disabled and it will cost loads to have a new sticker because the silly logo has changed.

I think the current sign is fine. No one will mistake it for anything else and it's really clear. Plus, the new sign would be hard to put on the roads for disabled parking and things like that.

I think a change is needed as it looks like the chair is what's important, rather then the person.

I think that it looks better active - but think about the cost- the total cost would probably amount to the same as creating wheelchair-friendly areas.

No it should stay the same. It would be to big a hassle to change it.

I think they should change the sign because it shows a clearer image of disabled people.

I think they should! It is better and therefore shows that just because you are in a wheelchair, it doesn't mean you can't be active!

I think they should not change it because the new one looks more like a sign for the Paralympics and it will confuse people.

It works well with the 2012 Paralympic values. The new logo would show that people are not so much 'disabled' but able to use their disability to their advantage.

I think it should change, because the old one suggests that disabled people are not as active as non-disabled people, and that's not right! Just look at the Paralympics!

I don't think that the sign should be changed because we're used to the one we have now.

I think that they shouldn't change the sign because people understand that sign better. Plus the modernized one doesn't really look like someone on a wheelchair.

There is no need to change it. It is recognisable as it is and it will cost a lot of money.

I think it should be changed - if you were disabled, you'd want a modern sign, wouldn't you?

NO, because I like it the way it is, and everyone recognises the sign the way it is. It'll be harder to know the sign if it is changed.

Yes it should be changed - the new one looks way better than the old one.

I think the symbol should be changed because the normal one we use now is boring and the new one brings attitude and makes us think.

I think a new design would be better because the old makes it look very lazy.

I think they should change it because then it looks better to people and makes it more exciting!