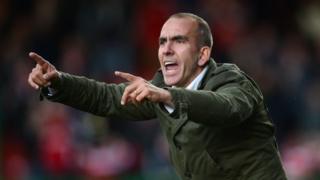 Sunderland manager Paolo Di Canio has been sacked after only winning two of his 12 matches since being appointed manager in March.

The controversial Italian had spent big in the summer but only managed a single point from his first five games this season.

It's believed that Di Canio angered his players by criticising them in public.

The Black Cats sit bottom of the Premier League and are now looking for a new boss.