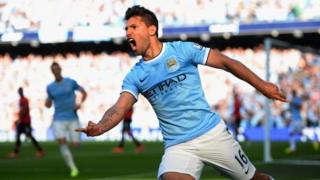 Manchester City thrashed United 4-1 in the first Manchester derby of the season.

Striker Sergio Aguero was the City hero with two goals.

He scored a volley in the first half, before Yaya Toure added another right on half time.

Aguero scored again to make it 3-nil, before Samir Nasri added a fourth.

Although Rooney pulled one back for United - City were a cut above their rivals.