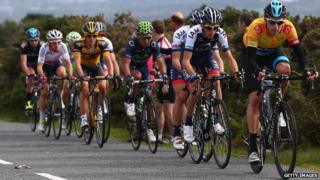 Sir Bradley finished seventh on Friday and leads the race by 32 seconds.

The 2013 Tour of Britain is made up of eight different stages across a week. It started in Scotland last weekend and finishes in London on Sunday.

The Tour of Britain is celebrating its 10th anniversary in 2013.

114 riders, representing 19 teams, have raced through the Lake District, Snowdonia and Dartmoor on a hilly route that is not expected to favour the sprinters until the final stage.