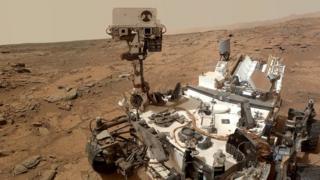 The search for life on Mars has hit a stumbling block according to scientists working with the Curiosity rover.

According to the robot's latest tests the atmosphere on Mars contains no methane gas.

A lot of methane gas is produced by living organisms on Earth, so finding the gas on Mars could indicate there is life there.

It was thought there was methane on Mars but after a year of looking Nasa says it hasn't found any.

Curiosity landed on Mars in August 2012 to find out whether the planet has, or ever had, the right conditions to support life.