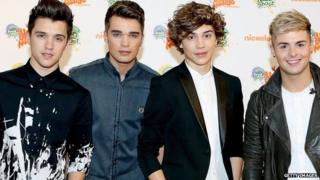 Union J singer JJ Hamblett has announced he is going to become a dad.

The 25-year-old pin-up revealed the news on his Twitter page, saying: "My girlfriend and I are super, super excited."

JJ said his bandmates are already thinking of names beginning with J for the newborn.

Pop rival Rylan Clark, who was booted off X Factor to save Union J, tweeted JJ to say: "So proud of you. I'm gonna be an uncle again!"