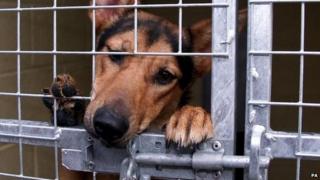 More than 300 stray dogs are picked up from Britain's streets every day, according to charity the Dogs Trust.

While the overall number has fallen by 6% in the past 12 months, the charity says the number is 'alarming' and there is still a problem.

They hope more owners will get their dogs microchipped before it becomes compulsory in England by 2016.

Almost half (48%) of the strays picked up were reunited with their owners, while more than a third of them (36%) were found a new home.

Sadly, 8% of those found had to be put to sleep.

"Whilst it is encouraging to see that the number of strays has fallen there is clearly still a problem," said Dogs Trust boss Clarissa Baldwin.

"We hope this alarming number will remind dog owners to ensure that theirs is microchipped."