Miniature books on display in Scotland 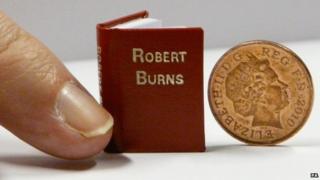 Some of the world's smallest books have been put on display at the National Library of Scotland.

One of the books is a copy of Old King Cole which measures less than 1mm in height! 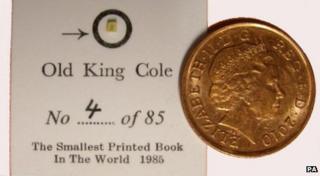 It was published in 1985 and held the world record for the smallest printed book for 20 years.

It is one of about 80 miniature books which will go on display in Edinburgh until 17 November.

A miniature book is generally defined as one that is less than 7.5cm tall.

Why would anybody publish such tiny books?

In the 1870s, the Glasgow book publisher David Bryce & Son became one of the most successful miniature book publishers in the world.

They found that books sold thousands upon thousands more copies if they were miniature.

Others, like the tiny copy of Old King Cole, are simply published for a bit of fun.