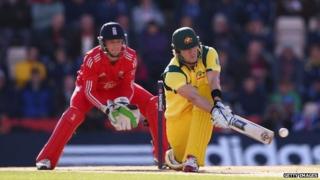 Shane Watson hit a powerful century as Australia beat England by 49 runs in the final one-day international to win the series 2-1.

But England could only manage 249, with Ravi Bopara's 62 the highest score as Mitchell Johnson took 2-21 from 10 overs and James Faulkner 3-38.

It means Australia get the plane back home on a high note, going into their home Ashes series later this year.

"I'm extremely happy to win the series," Australia captain Clarke told BBC Test Match Special. "To a lot of people this ODI series does not mean much, but to the Australia players it means a lot.

"I don't know whether it will have much impact on the Ashes back home [which starts in November], but we get the flight back home a lot happier as a one-day side."

"They showed a lot of promise; we've learnt they can step up to the mark."