Bumblebee species has nested in UK after becoming extinct 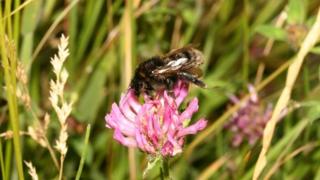 A species of bee has nested in the UK for the first time in a quarter of a century.

The short-haired bumblebee started dying out in Britain in the 1980s and officially became extinct in 2000.

Conservationists set up a project to reintroduce the species to Britain by bringing queen bees over from Sweden.

After releasing the queens at the RSPB's Dungeness reserve in Kent, offspring worker bees have been recorded there for the first time.

Short-haired bumblebees were once widespread across the south of England but declined as their wildflower rich grasslands disappeared.

Nikki Gammans, who leads the project, said: "This is a milestone for the project and a real victory for conservation.

"We now have proof that this bumblebee has nested and hatched young and we hope it is on the way to become a self-supporting wild species in the UK."