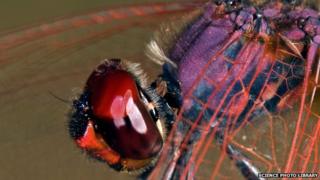 Have you ever wondered why it seems impossible to swat a fly that keeps buzzing around you?

A new study may have the answer: smaller creatures see time as if it's happening in slow motion.

This means they can take in more information and react more quickly.

Insects and small birds, for example, can see more information in one second than a larger animal, such as a human or an elephant. So that's why you can't swat that pesky fly!

Animals with the fastest visual systems included squirrels, starlings and pigeons. The researchers say the theory works the other way around too - larger animals may miss things that tiny creatures can spot.

How quickly can humans see?

The researchers say their study also shows differences between humans too.

But instead of the rate being connected to how big you are, it's factors such as age and practice that affect how you process time.

A goalkeeper or a Formula 1 driver is trained to see objects at a much faster rate than ordinary people - so in effect they can process time similar to the way small animals do.

According to the research you'll see time much slower than your parents, as the researchers say time 'speeds up' as you age.

The research was done by scientists from universities across the UK, and published in a journal called Animal Behaviour.

Graeme Ruxton, of the University of St Andrews in Scotland, was one of the authors of the report, and he says: "Having eyes that send updates to the brain at much higher frequencies than our eyes do is of no value if the brain cannot process that information equally quickly.

"This work highlights the impressive capabilities of even the smallest animal brains. Flies might not be deep thinkers but they can make good decisions very quickly."