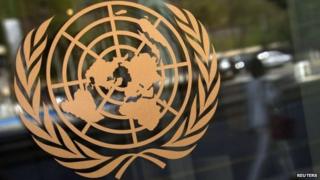 UN inspectors have said there is "clear and convincing evidence" that chemical weapons were used in Syria last month, in an attack that killed hundreds.

A report says that samples found at the scene of the supposed attack, in Damascus, show that the banned nerve gas sarin was used.

But the report doesn't say who was responsible for the attack.

Syria's government insists it did not carry out the attack, instead blaming rebel forces.

The inspectors say in their report: "The conclusion is that chemical weapons have been used in the ongoing conflict between the parties in the Syrian Arab Republic... against civilians, including children, on a relatively large scale."

Syria 'must give up' its chemical weapons

Last week America and Russia reached an agreement which says Syria's chemical weapons must be destroyed or removed.

The agreement says Syria must give up its chemical weapons within a week. These must then be destroyed by mid-2014, otherwise military action could still take place.

It's a really important step because America and Russia haven't been able to agree over Syria for more than two years.

China, France, Britain and the UN all say they're satisfied by the agreement.

The US had been considering firing missiles at Syrian weapons factories but Russia favoured a handover of illegal gas and firearms instead.

It has several main points:

Britain's Foreign Minister William Hague has welcomed the deal and France, which was the only country willing to join the US in taking military action against Syria, has also backed it.

America and Russia have had very different ideas about how to respond to the suspected poisonous gas attacks that killed hundreds of Syrians in Damascus last month. American thinks Syria's president Bashar al-Assad was responsible but he's denied it.

But after the Syrian president announced on he was willing to hand over the weapons on Thursday talks between Russia and America were stepped up to try and achieve a peaceful outcome.

Thousands of people have been killed in the ongoing conflict in Syria. For more on the background to the crisis click here.