Red squirrels 'making a comeback' in south of Scotland 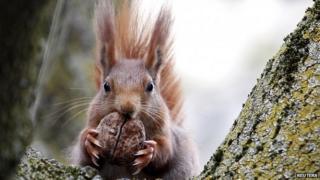 Sightings in the south of Scotland have suggested that red squirrels are fighting back against a deadly virus.

Called squirrel pox, the virus has no apparent effect on grey squirrels but is deadly for their red cousins.

There have been a number of outbreaks in recent years leading to a widespread grey squirrel control programme.

Sightings of the greys have now dropped, while reds have been spotted in some parts of Dumfriesshire where they have been absent for decades.

'Bit surprised' at the comeback

"It is tremendous. We have had some really good reports from a number of people," he said.

"I was contacted by a member of the public who lives in Annan and she said it was the first time she had seen a red squirrel in her garden and she had been living there for 47 years."

He said another instance was at Castlemilk Estate near Lockerbie where after an outbreak of squirrel pox, conservationists had worried about whether controlling grey numbers would have an impact.

"The woodland manager there wrote to me and he was very pleased and a bit surprised that the reds are coming back," Mr Trout added.