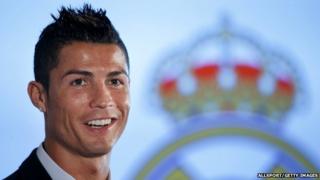 Cristiano Ronaldo has signed a new contract with Real Madrid.

The forward says he wants to stay at Real Madrid for the rest of his career after signing a new contract until 2018.

This has put an end to some rumours that hinted at a return to Manchester United.

The Portuguese player said: "Manchester United is the past. Real Madrid is now my home."

He added: "I hope that I'm here until I retire. This is a great club."

His previous contract with the Spanish side was due to expire in 2015.

Gareth Bale has since topped that in a £85million transfer deal when he joined Real this season.